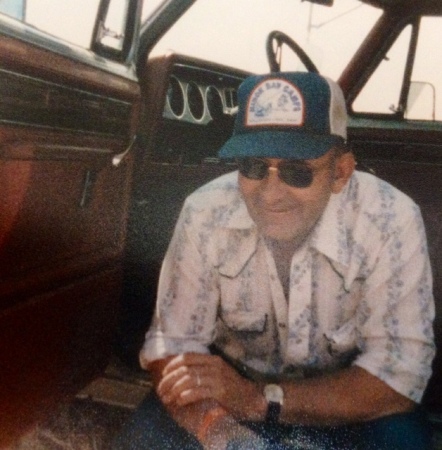 After a courageous battle with cancer, my beloved Grandpa passed away on July 31st.

I had just gotten settled at work that Thursday morning and when I opened my desk drawer to look for something I saw that my cell phone was silently ringing. My parents number was on the call display. Part of me knew and the other part denied what I was about to hear. I quietly answered it and my mom very apologetically told me he had passed. She had tried to reach me before I had gotten to work so that I wouldn’t have to cry at my desk. I did cry at my desk though, about as ugly as a cry can be. A million thoughts running through my head, I numbly tied up things at work and then I left for the day. What followed have been some of the hardest days I have lived, but even with the lows, there have been bright spots. I have witnessed so much love and kindness from the many, many people who knew my Grandpa.

I have learned in the days since his death that my Grandpa donated $20 to his church every Sunday. I learned that every neighbor on my grandparents street came by the house to pay their respects and all of them said the same thing: rain or shine or blizzard, they could count on Grandpa to be out walking his dog, Sammy. I learned that my Grandpa asked for a Filet O’Fish a few days before he died. It was always his favorite and even though he couldn’t actually eat it when it was delivered, he seemed happy just to see one. I learned that my Grandpa told my dad in the days before his death that he was so happy with the men my sisters and I had chosen and brought into our family. After Grandpa died, my boyfriend Tommy told me that at our very last visit with him, he had pulled Tommy aside right before we left and said, “Make sure you take care of that girl.”.

My Grandpa had the kindest eyes I’ve ever seen. He smelled like aftershave and Vicks and he always kept a bowl of nuts and the Bargain Hunter beside his spot on the couch. He was a foodie way before it was trendy and always ate his three square meals a day. After having a heart attack and 8 bypasses, he was advised to cut back on the treats and he was devastated. I even remember having a conversation with him about how much he missed his pie and ice cream after meals. Grandpa loved having company and parties and threw himself a birthday party every year at the beginning of December. He always bought a bottle of Strawberry Angel or Baby Duck for the occasion. After his party this past year, he had lamented how much he really wanted a glass of wine for his birthday but his medication didn’t allow. Even with his cancer diagnosis, he always saw life as something to enjoy with the people he loved.

One of my fondest, most cherished memories of him is this: When I was about five years old I found an old tie clip with an empty hole where a stone used to be. I asked my mom what it was and when she said it was for a man to wear on his tie, I decided to give it to Grandpa; he always wore one to church. I looked in a jewelry making kit I had and found a bright green plastic “jewel” that fit perfectly. I glued the jewel into the empty hole and proudly gave the tie clip to my Grandpa. About a year ago, I was visiting their home for the weekend and Grandpa was on his way out to church. I noticed his tie clip, recognizing it instantly as that one I’d made so long ago. I laughed and said “Oh Grandpa, you still wear that old thing?!” With total sincerity, he looked me right in the eye and said “Well sure, I still do.”

It is a testament to my naivety about death and loss that I had imagined throughout the process of my grandpa dying that I would be there when he actually died. Maybe as some means of coping I imagined that as he passed, he would be surrounded by all of us and we would all get a chance to hold his hand and say all of the lovely things we thought of him;  what he meant to us, how much we loved him and how much we would miss him. No one got to do that however, because he died a few hours after his last visitors left at ten p.m. He died alone and as much as I want to believe he made that choice and he was ready, there is a selfish part of me that hates that he was alone. A man as great as him, as loved as him, who lived the kind of life that he did, should not have to die alone. I never got the chance to say all of those beautiful things my Grandpa deserved to hear so instead I wrote them all in a letter and tucked it in his suit pocket at his funeral.

I never understood why someone would want a picture of their loved one in a casket. I never understood how someone could hold onto the cold hand of a deceased person or kiss their face. There was a time where I even though those things were a little morbid, but I get it now. I did all of them when the person who had died was my Grandpa. When you know that this is the last chance you have to physically hold the hand of someone you really, really love and cherish, that finality is crushing. When I went to the second viewing the morning of the funeral, I must have said goodbye two or three times before turning back around to say it one more time. I could not bear to leave him, despite trying my very hardest. I don’t think I’ve ever felt as desperate as I did in that moment, knowing that my last chance was now. It was here and I had to take it, whether I felt ready or not. I could not fathom leaving him there, in that room by himself, or leaving him in a closed box in the cemetery to be buried underground. I know that the physical body is just a vehicle for the spirit but the thought of the burial itself made me feel panicked and claustrophobic for him.

What about when it gets dark at night?

What about when it gets cold in the winter?

I know how crazy it sounds, but in a moment like that, bargaining felt like the only thing to do.

After the funeral service, my immediate and extended family gathered back at Grandma & Grandpa’s house to visit and reminisce. During that afternoon several of the men got to work on one of the toilets; it had given Grandma & Grandpa trouble for months and that day it had plugged & was overflowing into the basement. After a couple of hours of work, my dad emerged from the bathroom holding a simple gold band, a look of shock on his face. All of us looked closer and my Grandma exclaimed, “That’s Grandpa’s wedding band!” She hadn’t said anything to anyone but she assumed that the hospital had sent it to the funeral home. When he wasn’t wearing it in his casket she began to worry about what had happened to it. My dad found it wedged down beside the toilet they were working on; my Grandma concluded it must have fallen there before his last trip to the hospital because his fingers had gotten so thin. I know it is no coincidence that we found it after the burial. Grandpa didn’t want to be buried with that wedding band; he wanted Grandma to have it with her.

I have not experienced a loss of this magnitude thus far in my life, and I realize how fortunate I am for that. Grief is a new and unfamiliar territory for me. Since the death of my Grandpa I have acted in ways I’ve never known I could; every emotion feels heightened. I have been temperamental and impatient. I’ve been emotional in public. I have sobbed in my dad’s arms until his shoulder was wet. I have been walking in a store and felt my heart stop when I saw a man who from behind looked exactly like my Grandpa. I have cried because Tim Horton’s got my bagel wrong. I have sat in a room full of people and never felt so lonely, because the person I wanted to talk to most was my Grandpa, and he wasn’t there. I have guilt over missed opportunities with him and regret over the things he won’t be here to see. I have, however, already learned so much about myself and I know that in time this experience will make me stronger and better, more loving, less uptight. My Grandpa lives in my heart now and it feels bigger with him in it.

When I stopped by my grandparents’ house to visit a couple of years ago, my Grandpa excitedly told me that our last name meant “Bag of Flour” in Polish. He was convinced this was why I loved to bake and I tucked it in the back of my mind to name what has become this blog. Now the blog he helped name is going to be a great comfort for me. Cooking and writing, two great loves of mine will help me to heal. His name and his legacy will live on through me and the way I live my life. I hope to make him proud.

Rest easy, Grandpa. Thank you for the beautiful memories you have given me.

3 thoughts on “My Grandpa”