This next recipe I decided to test for my challenge is actually an imitation of Sprinkles vanilla cupcakes. Sprinkles is a widely known bakery, and a celebrity favorite, even being named on Oprah Winfrey’s “Favorite Things” list. Sprinkles was actually the world’s first cupcake bakery when it was opened in Beverly Hills and now has locations all over the United States. 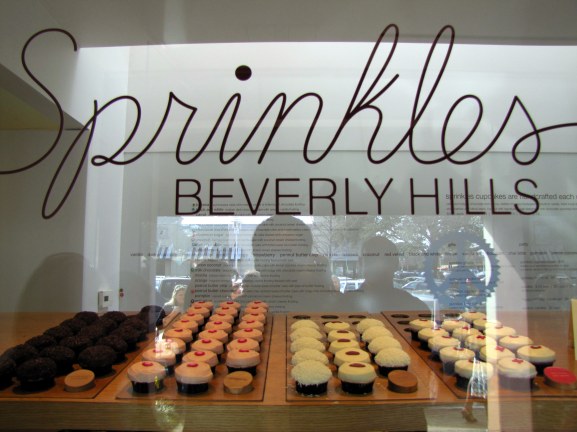 This recipe is a re-creation of their vanilla cupcake from another blog. It is quite different from the Magnolia one; it uses only cake flour and also incorporates sour cream, which always creates a moist cake from my experience. I did make one change to this recipe. My Main Taste Tester is allergic to tree nuts and I didn’t want to risk using almond extract. I also really want to focus on vanilla flavor only so I decided to sub the same amount of almond extract for extra vanilla. This recipe weirded me out a bit at first. I ‘m not super experienced with cake flour and the texture of the batter seemed a bit off from what I’m used to (and I’ve seen a lot of cake batter). The batter tasted great though and I was super curious to see how these would turn out. They did take a little longer to bake than the original recipe suggested (see my note below). Once they came out of the oven, they looked like this: 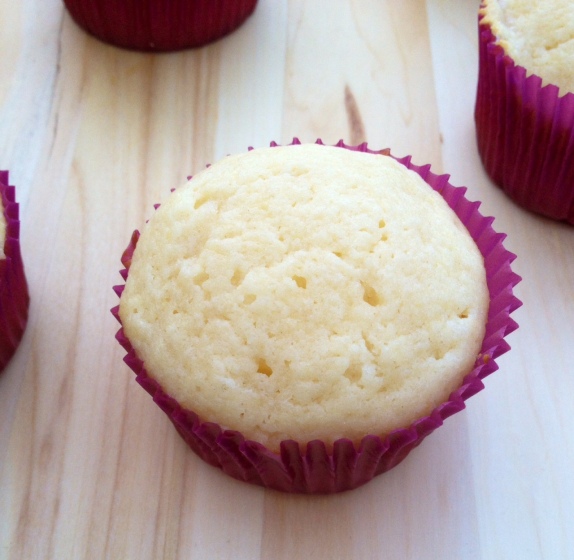 Here is a closer look at the inside:

They were slightly lighter in color and texture than the Magnolia ones. First taste? Amazing. Very buttery and rich tasting. My Main Taste Tester and I both really enjoyed them. He also commented that he felt he had been too generous scoring the Magnolia ones. He much preferred these. I shared the rest at work and got great feedback there as well. They were even better on day two, which is a plus. I did find that the Magnolia ones didn’t retain their moisture very long. The consensus? Great texture, flavor and moisture, but we still need more vanilla.

Simplicity: “They were simple to eat!”

Sift flour, baking powder, baking soda and salt together in a small bowl and set aside.

Cream butter and sugar in the bowl of an electric mixer fitted with the paddle attachment until light and fluffy. Add the egg and egg yolk one at a time, beating to combine after each addition. Add vanilla and sour cream, beating until just combined. Reduce the mixer speed to low and stir in the flour in a few additions. Remove the bowl from the mixer and stir the last bit of flour in with a spatula until just combined. Do not over mix. Scoop the batter into cupcake liners and bake for 14-18 minutes (see my note below) or until a toothpick inserted into the center comes out with a few clinging crumbs. Allow to cool completely before icing.

Note: My cupcakes took closer to 22 minutes to bake. Use your judgment.

Coming up next in the series…

A vanilla cupcake recipe from one of my favorite cookbooks!

4 thoughts on “The Search for the Perfect Vanilla Cake: Sprinkles Vanilla Cupcake”

First day of daycare for this guy. I’m a mess of emotions and he’s mostly just stoked about his new Spider-Man backpack. #leothomas #twoyearsold
Leo goes to a dog show.🐕#leothomas #dogshow #extremedogs @extremedogshow
We spent this weekend celebrating my niece Harper’s second birthday! Love this sweet girl and the memories we’ve made with her this year. So much more is to come! 💗 #happybirthday #harpermelodie #twoyearsold
Every day I’m so thankful that @therealtomerwin is Leo’s dad. He is truly the best there is. We love you Tom!! #happyfathersday #leothomas #bestdadever
Leo is TWO. Happy birthday to the best little boy in the whole entire world. 💙 #leothomas #twoyearsold #happybirthday
What an honour it is to raise this special little boy! I can’t thank him enough for all he’s taught me and all the ways he’s helped me grow as his Mom. Happy Mother’s Day to all of the wonderful mothers and mother figures in my life and to those who struggle with this day, I’m sending you love, too. 💗 #mothersday2019 #leothomas #motherhood
%d bloggers like this: