I lived with my grandparents my first year out of high school, and to say that I learned a lot about my Grandpa during that year would be an understatement. He was a man of his routines and I grew accustomed to all of them. He paid his bills on the same day. He went for groceries on the same day. He watched the exact same shows each day. If it was Friday, I knew that if went to the kitchen table for lunch, Grandpa would be there with the familiar brown paper bag emblazoned with the golden arches.  Inside that bag was his favorite, the Filet O’Fish. He only got them on Fridays because back then, McDonald’s had the McDeals and Friday was cheap Filet O’Fish day.

One Friday he came home furious. Like, spitting mad. When I asked him what was wrong, he said huffily that McDonald’s had gotten rid of the McDeal and he had to pay full price for his Filet O’Fish that Friday. The horror! Anyway, after that Filet O’Fish Friday was not as common at the house. The poor guy couldn’t stand to pay full price. His love for Filet O’Fish never waned though. My mom told me that a few days before he died she asked if she could get him anything, and he requested a Filet O’Fish. Funny how the simplest things in life can be such a comfort.

Ever since my mom told me that tidbit, I’ve been transported back to that year of living with my grandparents. So many amazing memories have crept into the back of my mind. This led to many nostalgic tears and eventually morphed into a relentless craving for a Filet O’Fish. I decided to switch up the old classic and I’m not kidding you; this was the best sandwich I’ve had in ages. Seriously delicious. It totally hit the spot and I loved making it at home.

Happy Filet O’Fish Friday, Grandpa! Where you are now, I bet they’re free whenever you want them.

Mix together sauce ingredients in a small bowl and set aside.

Take out three small bowls. Put the flour in one, beaten egg in one and panko and seasoning salt in one. Dip a piece of fish into the flour, covering it, then dip it into the egg and then roll it into the seasoned panko, making sure it is evenly covered. Place it on a plate and repeat with the other piece of fish.

Once the fish are breaded, heat a skillet over medium heat and melt the tablespoon of butter in the pan. Once skillet is hot and butter is melted, lay the pieces of fish in the skillet and fry about 2-3 minutes, until golden brown. Flip and cook the other side 2-3 minutes. Prepare buns while fish is cooking. Fish is done when it is crispy and golden and flakes with a fork.

While fish is cooking, heat another pan on medium heat. Cut your buns in half and spread with butter. Lay buttered sides down in the pan to toast the buns. Once the buns are toasted, spread each side with tartar sauce. Add the cooked fish, cheese slices and spring mix. Serve! 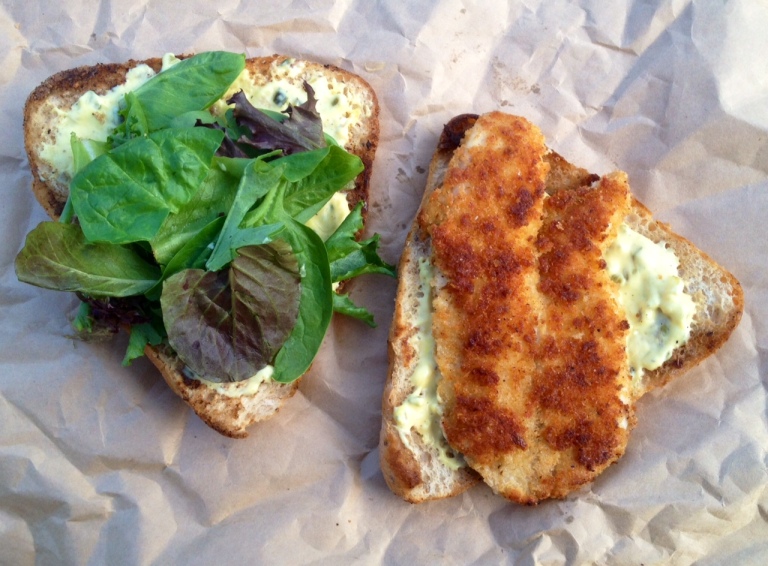 One thought on “A Fancy Filet O’Fish Sandwich”